This is the MOST comprehensive tour of India! We also offer a pre-tour to Sri Lanka and a post-tour extension to go on a tiger safari in Corbett National Park. Our highlights include; Taj Mahal, overnight in a house boathouse, Goa, Bombay, Agra

Details will be available for the Sri Lanka section of this tour will be available shortly - please contact us to let you know you are interested and we shall send you the detailed itinerary as soon we have it finalized. 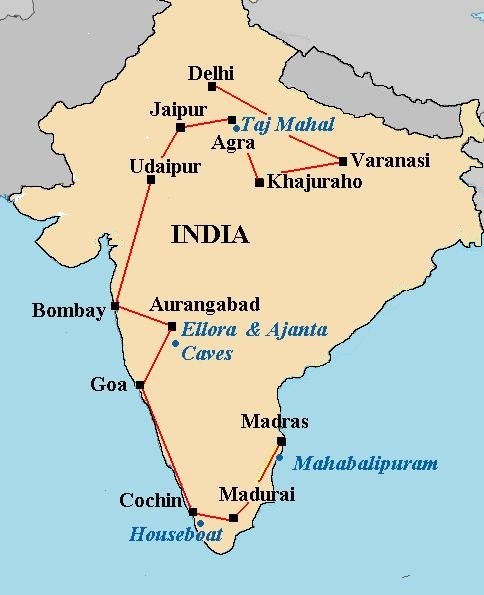 There is just SO MUCH to see and explore in India…Our tour combines the lesser-known sites of South India as well as the famous highlights of the North. We fly most sections of our route so we can cover more areas of the country. However, we travel overland by our own air-conditioned coach on several sections…. we also travel by houseboats on inland waterways, rickshaws through busy streets & elephants to the Amber Fort!

Where possible, we try to spend more than one night in an area and the hotels on this tour are of an excellent, Western 4- and 5-star standard. This is one of my personal favorite tours and 2020 will be my sixth time escorting our tour to this magical country!… Please call with any questions – I look forward to talking with you… Warm regards. Julie Bruce

“loved the old Hindu and Buddhist caves ,old Hindu temples…travel on the Ganges River, visiting Gandhi’s museum, visiting old castles and forts and of course the Taj …..also Julie was full of fun and information about the culture and history of India” MH Vancouver BC India 2011

“Thank you for a most wonderful trip!! Can’t say enough about your tour and India! What a wonderful country. And the people– so friendly and humble and welcoming”
India, November 2014 CL BC

“I really enjoyed the wonderful hotels. The Taj Mahal was my favorite spot but there were many more. There is so much history in India. We only touched the surface in 28 days but we did see as much as we could.”
India November 2014 EC Cobble Hill BC

DAY 1 SUNDAY January 12
MADRAS
The LAND ONLY tour begins at our hotel this evening.
First of 2 nights in Madras. Hablis Hotel or similar. No meals 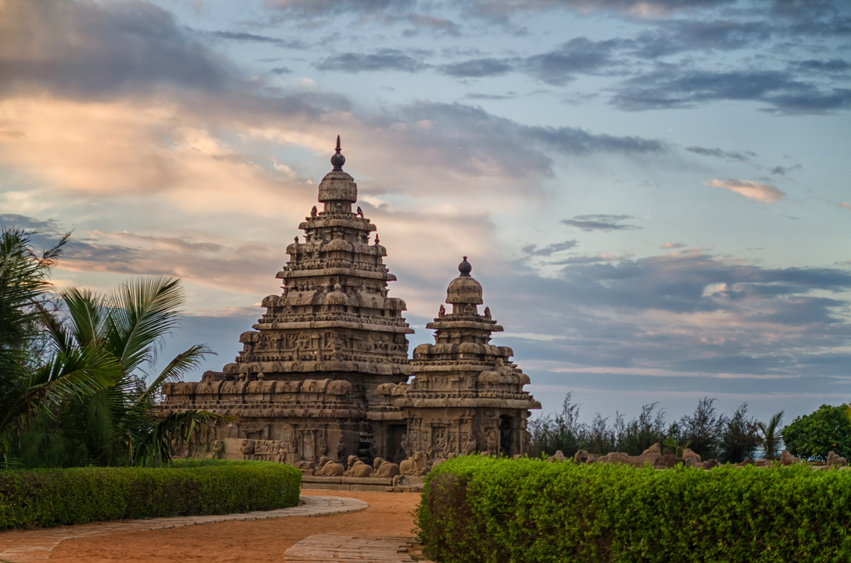 This morning we take a driving tour of the vibrant and proud capital city of the state of Tamil Nadu, Madras (now called Chennai.) We see Fort St George which was begun by the East India Company around 1640. We also see the buildings housing the Tamil Nadu Government Secretariat and Legislative Assembly. Driving along Beach Road we can admire Madras’ beaches on one side and fine public buildings on the other. Later we drive down the coast to the village of Mahabalipuram. Here we find pure, ancient Hindu art such as the epic frieze known as Arjuna’s Penance carved directly into the rock face.
Second of 2 nights in Madras. Hablis or similar. Breakfast & Dinner

DAY 3 TUESDAY January 14
MADRAS – MADURAI ( FLY)
This morning we take the short flight from Madras into the heart of tropical South India to the “Temple City” of Madurai. This afternoon we take a guided tour of Madurai. We begin with a visit to the stunning Palace of Thirumalai-Nayak, built by the most famous king of the 17th century Nayak dynasty. Leaving the palace we walk through the teeming market streets of Madurai to the main temple complex which is believed to be covered in over 33 million sculptures!
Overnight outside Madurai. Gateway Hotel Pasumalai or similar. Breakfast & Dinner.

DAY 4 WEDNESDAY January 15
MADURAI – PERIYAR
This morning, travelling in our own air-conditioned coach, we cross from Tamil Nadu state into the state of Kerala. This afternoon we take a tour of a spice plantation in the surrounding hills.
Overnight in Periyar. Poetree Sarovar Portico Hotel or similar. Breakfast & Dinner .

DAY 5 THURSDAY January 16
PERIYAR – SPICE HILLS – INLAND WATERWAYS – HOUSEBOATS
This morning we travel overland in our air-conditioned coach through dramatic mountains to the southwest coast of India, bordering the Arabian Sea. This afternoon we travel a sheltered inland waterway by motor launch from Kumarakom. We spend tonight on air-conditioned houseboats on one of the lakes, enjoying wonderful hospitality and perfect peace – far from any town.
Overnight on Lake n Lagoons houseboats or similar. Breakfast & Dinner.

DAY 6 – FRIDAY January 17
COCHIN
We begin our morning observing life along the waterways, we pick up our bus again at Allepey for the journey to Kerala’s main city, Cochin. Upon arrival, we take a short tour of old Cochin, laid out at the entrance to a large bay which forms a natural harbour. We explore the quaint streets in the old Fort Cochin area with their 17th century Dutch and traditional Kerala architecture. This evening we have a chance to see the famous Kathakali dancing with its elaborate masks and costumes.
Overnight in Cochin. Holiday Inn or similar. Breakfast & Dinner.

DAY 7 SATURDAY January 18
COCHIN – GOA ( FLY)
This morning we fly from Cochin to Goa which was the capital of the Portuguese empire in the east from the early 16th Century. Goa today is a relaxed, tropical paradise exhibiting a fusion of Indian and Portuguese influences. Later this afternoon we have time to enjoy swimming in the warm Arabian Sea and wandering the beach
First of 2 nights in Goa. Taj Exotica Hotel or similar. Breakfast & Dinner.

DAY 8 SUNDAY January 19
GOA SIGHTSEEING
After our relaxed start, we drive to the site of Old Goa. We visit the Cathedral of St Catherine which was completed in 1619 and is the largest Christian church in Asia. Across the central plaza of Old Goa is the Basilica of Bom Jesus, where the mortal remains of St Francis Xavier are enshrined. We also have explore Goa’s capital city- Panjim. Situated at the mouth of the Mandovi river, Panjim is reminiscent of a provincial Mediterranean town. The downtown is laid out on a grid pattern with leafy side avenues.
Second of 2 nights in Goa. Taj Exotica Hotel or similar. Breakfast & Dinner.

DAY 9 MONDAY January 20
BOMBAY – AURANGABAD (FLY)
After a relaxing morning at the beach we fly from Goa to Aurangabad via Mumbai.
First of 2 nights in Aurangabad. Taj Residency Hotel or similar. Breakfast & Dinner.

DAY 10 TUESDAY January 21
AJANTA CAVES
Aurangabad is named after the last of the great Moghul emperors, Aurangzeb (1685-1707.) Today we visit the Ajanta Caves, Second Century Buddhist caves hewn on an enormous scale from the living rock and painted with vivid scenes from the life of the Buddha.
Second of 2 nights in Aurangabad. Taj Resindency Hotel or similar. B & D.

DAY 11 WEDNESDAY January 22
ELLORA - BOMBAY (FLY)
This morning we visit some of the 34 rock-cut temples in the Ellora Caves group, a UNESCO World Heritage site. There are 12 Buddhist (600-880 AD), 5 Jain (800-1000 AD) and 17 Hindu (900 AD) structures. The main structure at Ellora is considered to be the largest rock-cut monument in the world. Late this afternoon we return to Aurangabad and take the short flight back to Bombay.
First of 2 nights in Bombay/Mumbai. Trident Nariman Point Hotel or similar. Breakfast and Dinner.

DAY 12 THURSDAY January 23
BOMBAY + ELEPHANTA CAVES
This morning we make our way to the symbol of Bombay – the Gateway of India – and the splendid Taj Mahal Hotel. From here we take a motor launch trip to Elephanta Island to visit the caves with their 6th Century sculptures dedicated to the Hindu god Shiva. These are a UNESCO World Heritage Site. This afternoon we take a city tour of Bombay to see some of its splendid Victorian buildings from the era of the British Raj, including the High Court, Rajabhai Clock Tower and Victoria Terminus railway station. We will also see the Dhobi Ghat, the largest outdoor laundry in the world. We will also visit the Mani Bhavan, where Mahatma Gandhi stayed when visitting Bombay.
Second of 2 nights in Bombay/Mumbai. Trident Nariman Point Hotel or similar. Breakfast and Dinner.

DAY 13 FRIDAY January 24
BOMBAY – UDAIPUR (FLY)
This morning we continue our sightseeing in Bombay. We drive along Marine Drive, popularly known as the Queen’s Necklace. We view the memorial to Haji Ali, a Muslim saint, and drive to the area of the Hanging Gardens, sacred to the Parsi religious sect of fire worshippers, for a splendid view of the city. This afternoon we fly from Bombay to Udaipur in Rajasthan
First of 2 nights in Udaipur. Radisson Blu Resort or similar. Breakfast & Dinner.

Today we enjoy a city tour of Udaipur. This morning we cruise on Lake Pichola before we visit the City Palace, which is the largest complex of palace buildings in Rajasthan, being built over a period of 400 years. From the City Palace we look across the water to the famous Lake Palace, now one of the world’s most exclusive hotels. Second of 2 nights in Udaipur. Radisson Blu Resort or similar. Breakfast & Dinner

DAY 15 SUNDAY January 26
UDAIPUR – JAIPUR
This morning we make our way to Jaipur, the capital of the state of Rajasthan. This ‘pink city’ is justifiably world-famous. Built in 1728, the city is laid out according to the principles of perfect Hindu architecture but there are also Jain, Moghul and Bengali influences.
First of 2 nights in Jaipur. Holiday Inn City Centre or similar. Breakfast & Dinner.

The Amber Fort, built in 1592, is considered to be the most magnificent of all the palaces of the Rajput kings. We mount our decorated elephants for the ride up the hill and into the actual fortress-palace, where we take a guided tour. This afternoon we take a guided tour of Jaipur city. The City Palace is now a superb museum. The Mubarak Mahal (Palace of Welcome) contains an exhibition of musical instruments, textiles and clothes. Above the doors of the Armoury ‘Welcome’ is spelt out in knives and ‘Goodbye’ in pistols! In the Sharbata- badra (Hall of Private Audience) we will see two urns which are the largest silver items ever made. Four colourfully-decorated Peacock Doorways lead into rooms filled with fine Moghul glass. The Art Gallery contains a superb collection of carpets, miniature paintings and over 20,000 manuscripts. We also visit the Jantar Mantar, an extraordinary astrological observatory built for Maharaja Jai Singh II in the early 18th century. We will see the rose coloured city walls which have seven monumental gates. This evening we take a rickshaw ride through the bustling streets.
Second of 2 nights in Jaipur. Holiday Inn City Centre or similar. Breakfast & Dinner.

DAY 17 TUESDAY January 28
JAIPUR – FATEHPUR SIKRI – AGRA
This morning on our way out of the city we stop to see the most photographed building in Jaipur and one of the symbols of India – the Hawa Mahal (Palace of the Winds). Our drive today takes us to the Moghul “ghost city” of Fatehpur Sikri. Between 1570 and 1582 Akbar the Great had a totally new, planned city built here in red sandstone. His grand plan was to move the capital of the Moghul Empire here in thanks to a local saint who had granted Akbar’s prayers for a son. Akbar used the opportunity to experiment with different architectural styles. Unfortunately, water was short so, after only 14 years, the city was abandoned and the capital moved back to Agra. Driving further east we come to Agra, home of one of the most recognisable buildings on earth – the Taj Mahal.
First of 2 nights in Agra. Crystal Sarovar Hotel or similar. B & D

DAY 18 WEDNESDAY January 29
AGRA (TAJ MAHAL)
Our tour of Agra includes a visit to the Red Fort, the centre of the early Moghul Empire for over 150 years. We will see graceful royal apartments and palaces from the reigns of Akbar and Shah Jahan. The fort, built on an outcrop above the Yamuna River, affords superb views downstream to the Taj Mahal. This afternoon we time our visit to the magnificent Taj Mahal
Second of 2 nights in Agra. Crystal Sarovar Hotel or similar. Breakfast & Dinner.

DAY 19 THURSDAY January 30
AGRA – KHAJURAHO
This morning we get a chance to sample the famous Indian railway system as we travel by train from Agra to Jhansi and transfer by our own coach to Khajuraho.
Overnight in Khajuraho. Jass Radisson Hotel or similar. Breakfast & Dinner.