Experience the best of the Maritimes on our small-group tour of Nova Scotia, New Brunswick and Prince Edward Island (PEI.) These 3 are known as the “Maritime Provinces.“ You can combine this tour with the addition of our tour to Newfoundland & Labrador

Begins Oct 1st in Halifax and finishes Oct 12th in Halifax. On this tour we do not have any sightseeing in Halifax city itself because some members of the group will have visited the largest city on Canada’s East Coast before. If you wish to explore the city more thoroughly, you can choose to add our optional Halifax pre-tour (details at the end of our main itinerary below) or arrive in Halifax a day or more before the tour starts and/or stay on in Halifax for a day or more after the tour finishes.

Please let us know if you are interested in combining the 2 tours. 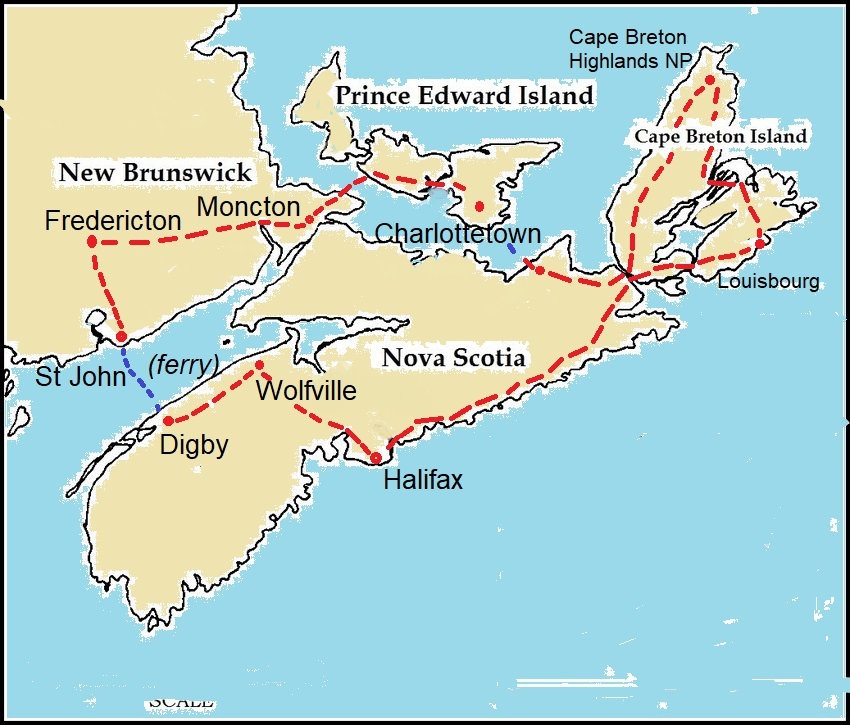 Thurs Sept 30thWe arrive tonight at Halifax Airport (YHZ) and transfer to our hotel.
Overnight in Halifax. Cambridge Suites Hotel or similar. No meals.
Fri Oct 1st
Halifax City Tour
By far the largest urban area in the 4 Atlantic provinces, Halifax has one of the largestnatural harbors in the world. Incorporated as a city in 1841, the site of Halifax has been inhabited by humans since the Ice Age, with Mi'kmaq people living in the area for 3,000 years before European exploration.
Our driving and walking tour takes us to the city’s most well-known buildings and landmarks such as Halifax Citadel National Historic Site. Towering over downtown Halifax, 4 forts have occupied this hilltop since 1749. The fort that stands today dates back to 1856. A kilted member of the 78th Highland Regiment provides us with insights into what it was like to be a soldier then, as we explore the Citadel's corridors and learn about Halifax's involvement in major wars – such as the American Revolutionary War, the American Civil War and both World Wars.
Halifax’s status as the commercial capital of Atlantic Canada has helped the city come into its own as a cultural hub as well. While we are exploring downtown Halifax, we will walk along part of the 2-mile boardwalk of the Halifax Waterfront. This is a fun-filled spot packed with cafes, restaurants, bars, breweries, shops, historic ships, boat tours and ferries – not to mention buskers and other street performers. We have free time over lunchtime for you to explore the waterfront Halifax Seaport Farmers Market, which was established by royal decree in 1750. Travelers and locals alike visit the market to purchase soaps, baked treats, fresh produce, fish, jewelry and more from nearly 100 vendors.
We visit the Canadian Museum of Immigration at Pier 21 where, between 1928 and 1971, 1 million immigrants passed through Pier 21 to start new lives in Canada. This large ocean liner terminal – sometimes referred to as the “Ellis Island of Canada” – has since become a National Historic Site. As we wander the halls of Canada's National Museum of Immigration, we learn the stories of some of the immigrants who passed through here with such high hopes.
It makes sense that Canada's oldest and most substantial maritime museum is located in Halifax – the city's history is filled with stories from the sea. At the Maritime Museum of the Atlantic we see the exhibit detailing Halifax's response to the 1912 sinking of the Titanic. The display includes artifacts from the 'unsinkable ship' and recounts local efforts to recover lost passengers and remaining parts of the ship. In fact, it was at this museum that Canadian director James Cameron saw the carved panel that inspired Leonardo DiCaprio and Kate Winslet's raft in his 1997 movie 'Titanic.'
Fairview Lawn Cemetery is known as the “Titanic Cemetery” because it is the final resting place for over 100 victims of the sinking of the 'unsinkable' RMS Titanic.
Halifax Public Gardens are one of the finest surviving examples of a Victorian garden in North America. They were founded by the Nova Scotia Horticultural Society in 1836 and were recognized as a National Historic Site in 1984. These gardens are part of Canada’s Garden Route.
Breakfast only. This evening you can enjoy dinner (at your own expense) at a cozy local restaurant, maybe with live music. Julie and Norman will make suggestions for restaurants close to our hotel. Tonight the rest of our group fly in to join our Canadian Maritimes tour.
TOUR INCLUDES:
NOT INCLUDED:
FLIGHTS:
Our flights specialist suggests flying from Vancouver through Toronto to Halifax (YHZ) with Air Canada and returning from Halifax via Toronto with Air Canada. You do NOT have to come to Vancouver to join this tour. You are welcome to book your own flights or we can put you in touch with our flights specialist who can book flights for you from any city. Please let us know.
SINGLE TRAVELERS:
Our published price is based on 2 people sharing a room. If you would like to share, we will do our best to find you a roommate. The EARLIER you pay your deposit, the more likely we are to be able to find you a roommate. If you wish to be guaranteed a single room, there is a Single Supplement charge of $1,200 Canadian + HST. Those people traveling alone but wishing to share will be informed prior to their final invoice being sent if a roommate is not currently available. At that point, you will be invoiced for the Single Supplement. If a roommate subsequently joins the tour, your single supplement will be refunded with the final documentation.
PAYMENT:
Land portion of the tour must be booked directly with Royal Heights Tours. You can secure your place on the tour with a $400 per person non-refundable deposit. We take payment by cheque, Visa or Mastercard for the $400 /person deposit. Your invoice for your Land tour will be e-mailed to you in mid-August. Payment will be due by August 30th. Price quoted is for FINAL PAYMENT by cheque. Should you wish to pay the outstanding amount for the LAND tour by credit card there will be an administration fee of 2.5% on the outstanding amount.
SPECIAL NOTES:

Terms, conditions and restrictions apply; pricing, availability, and other details subject to change and/ or apply to US or Canadian residents. Please confirm details and booking information with your travel advisor.