Risk-takers get the Nile to themselves

On the top deck of the cruise ship River Tosca, the swimming pool was cool and inviting in the afternoon heat. Below, the fabled Nile was wide and blue and calm. Palm trees dotted the river’s shoreline where farm animals grazed. And I had the deck of the 236-foot ship all to myself. That’s emblematic of cruising the Nile at a time when Egypt’s tourist industry has been decimated by fears that the turmoil of 2011’s Arab Spring lingers. The ship, designed to carry 82 passengers, had only 16 for a week’s journey in late February. We enjoyed hand-and-foot service and had no crowds to fight as we strolled through some of the most famous and spectacular remains of the land of pharaohs. Beth Misakonis and her husband, Leo, retired information technology professionals from Mechanicsburg, Pennsylvania, decided 2016 was the year for them to rebook their Egyptian cruise that was cancelled during the Arab Spring protests. Friends and relatives urged them not to go. But Beth noted that mass shootings happen in the United States “I think there are risks anywhere and everywhere,” she said. Leo added: “It’s always been on our bucket list.” A river cruise isn’t always the best way to see a country’s highlights, but it works perfectly for Egypt. The Nile Valley is Egypt’s heartland and breadbasket, and the river itself is the main highway of Egyptian history, from Cairo in the north to Luxor, Aswan and Abu Simbel in the south. It’s a tour on which your clean, cool, spacious hotel room follows you from place to place, with no luggage to haul. Today’s Egypt seemed a calm enough place when we visited. The country’s military-led regime overthrew an elected Islamist government in 2013 and has since cracked down brutally on all forms of dissent, including the Muslim Brotherhood, the main Islamic social-political movement.

Our small group with Uniworld river cruise line — all but two of us Americans — was often discreetly accompanied by armed guards. Whether that made us feel safer is up for debate, but no one in the group seemed concerned about our security, except perhaps when approached by locals desperate to sell us souvenirs. That wasn’t always pleasant, but given the tourism decline it’s easy to understand. A firm “la shukran” (no, thank you) was usually enough to turn them away. The itinerary began and ended in Cairo, where the Four Seasons Hotel was our refuge in the sprawling, chaotic, dusty metropolis. We spent a full day at the beginning of the tour, and another at the end, in Cairo, at the same hotel. On the first day we saw the Egyptian Museum and Tahrir Square. On the last, we visited the pyramids. 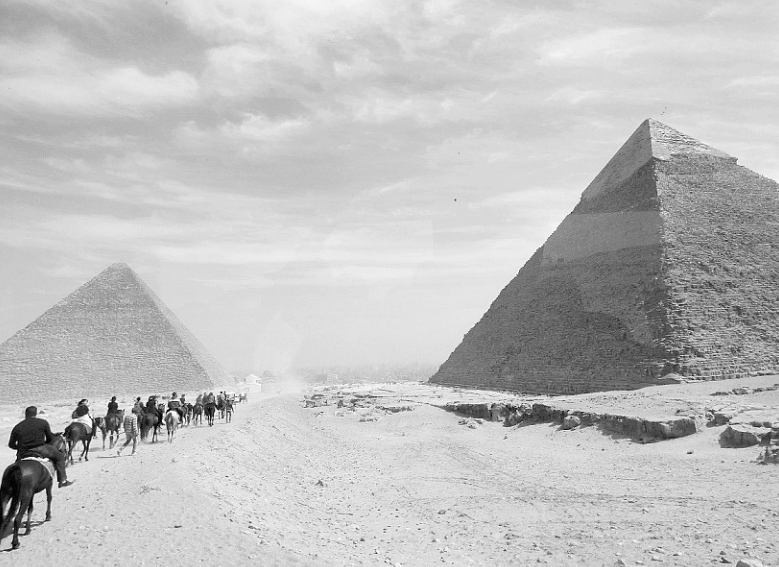 Tourists on horseback explore the Great Pyramids of Giza.

After an hour’s flight south from Cairo, we embarked on the River Tosca at Luxor, site of the ancient Egyptian capital of Thebes. Many of the great sites of Egyptian antiquity are within a short bus ride of Luxor, including the temples of Karnak and Luxor, with their rows of massive columns. Only a bit farther away, on the Nile’s west bank, lies the Valley of the Kings, burial place of Egyptian rulers over five centuries. The tombs showcase chambers with well-preserved paintings and hieroglyphics. From Luxor, we sailed to Aswan, a little more than 160 kilometres south. We took a ride in a felucca, one of the nimble boats with triangular sails that have plied the river for centuries. On the way to visit a Nubian village, we stopped at a small, sandy beach, where I walked down a plank lodged against the boat and waded into the cool, clear waters of the Nile. In British colonial times, Aswan’s Old Cataract Hotel (cataract is an old-fashioned term for waterfall) was a favourite stop for tourists, including Agatha Christie, who wrote Death on the Nile there. We dropped in for high tea and a tour before returning to the ship. These days, Aswan is the southern terminus of Nile cruising — the Aswan High Dam, built with Soviet aid in the mid-20th century, cuts off river traffic there. Aswan is also the jumping-off point for what might be Egypt’s most spectacular ancient site. And no, I don’t mean the pyramids. A short flight south took us to Abu Simbel, the cliff-side temple complex built by the pharaoh Ramses II nearly 3,300 years ago. Twenty-metre-high statues of Ramses guard intimate temple chambers carved from solid rock. Even more amazing is the temple’s recent history. When the construction of the high dam threatened to submerge the temple beneath Lake Nasser, the whole complex was carved into pieces and reassembled nearby on higher ground, grafted onto artificial cliffs custom-built to hold it. It’s an engineering feat to rival anything the pharaohs accomplished. The trip’s most memorable moment didn’t involve a temple, tomb or pyramid. On the last full day of the cruise, in late afternoon, my husband and I took a bottle of Egyptian red wine up to the top deck. We had the space to ourselves. The setting sun painted the western sky pink and blue behind streaks of clouds as we cruised north toward Luxor. Red, sandstone cliffs rose in the distance. A light breeze took the edge off the fading heat. The only sound was the thrum of the ship’s engines. We sipped our wine, read and watched the riverbank panorama for at least an hour, perhaps two. Then, from the direction of the rising moon, the Muslim call to evening prayer sounded, first from one brightly lit minaret in a riverside town, then another, and finally a chorus of rhythmic, fervent chanting. It was a sound that had been heard at this time of day, in this place for more than a millennium. The pharaohs had journeyed down this stretch of river two millennia before that. Perhaps there was a pretty sunset and a gentle breeze for their cruise, too. 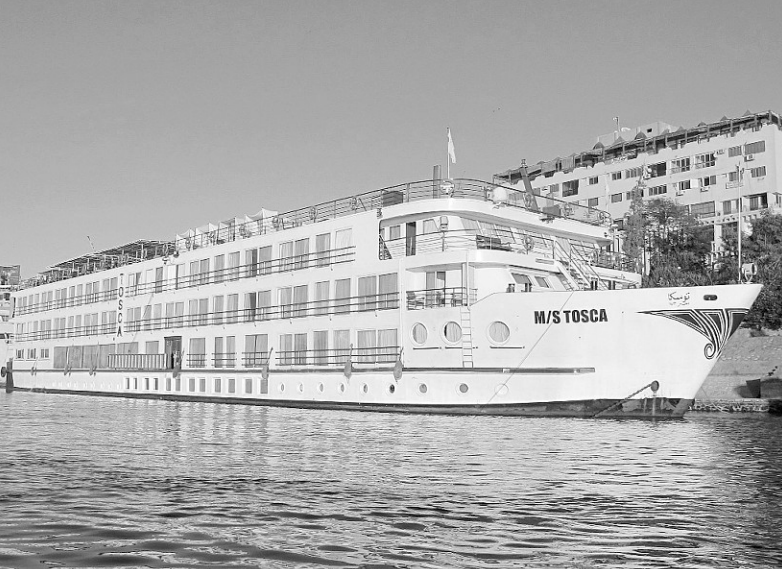 Start your trip to Egypt